Fundraising with a D8

One of our members Cameron Duncan had finished restoring a 2U-D8.  The community of Spy Hill in which he resides annually has a sport day and rodeo, he has always wanted to have an addition to the weekend that included old tractors and equipment.  So in 2019 the first ever antique tractor pulls 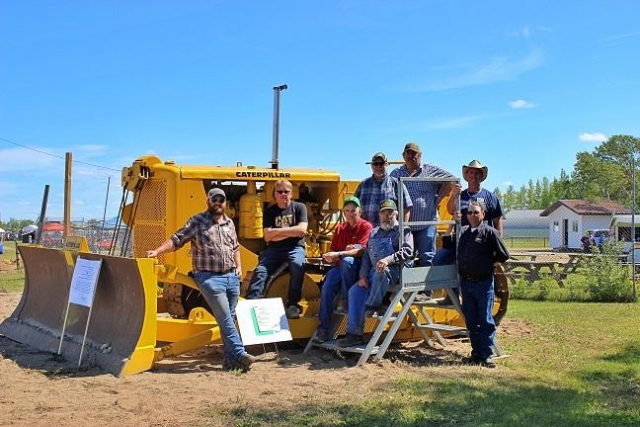 were help at the Spy Hill sports days and rodeo.  Cameron parked his D8 on the grounds with a sign that said "Make a donation to the Jim Pattison Children’s Hospital Foundation and climb aboard 1952 Caterpillar D8 for a photo" in addition to the sign he wrote up a clever story to go with the theme of hospitals.  “I was born in 1952 and began working almost immediately building roads, dams, railroads, clearing bush, and pulling farm implements to make life easier. Over the years I have been to the doctor a few times. I have had 3 knee replacements (final drives) in my lifetime. I have had stomach (transmission) problems twice once in 1960 and again in 1980. In 2017 I had some minor heart (engine) problems, and in 2018 had a heart transplant. (new engine) I have had many owners over the years, my last owner was the late Dave Blankley until Cameron Duncan purchased me. The same model of D8 as I am was the machine that Cameron and Jim Duncan started out with in 1967 as Duncan Bros. I am 67 years old now and retired my owner keeps me painted and polished. I get lots of attention. Thanks for all the wonderful years”  It was entertaining for kids to read before they climbed up for a picture.  After the dust settled we ended up presenting the children's hospital with $1000