Email: This email address is being protected from spambots. You need JavaScript enabled to view it.
Phone: (815) 988-7936

Chapter 4 gathered to perform maintenance on equipment and grounds work for the upcoming show.  Many things were completed along with building a pad and setting up a working display of equipment in the Rock and Dirt area.  Next work day will be Saturday August 14th, 2021 from 9am to ?. 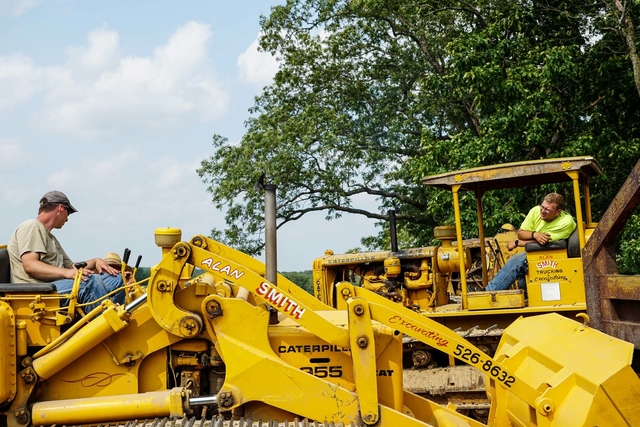 On July 17th, 2021 Chapter 4 gathered to perform maintenance on equipment and grounds for the upcoming show.  Some work was some continued work on the Diesel Forty, Caterpillar Ten, 955H, Bantam excavator, week control, installed a flag pole, placed things from woods back to open field, and planning for some preventive building work.  We have been active in planning additional work days this year for members to get involved and do work  after the idle time of equipment of last year.  If you were not able to join us the next work day will be July 31st, 2021 from 9am till we had our fill.  Thank you for all that came out to the park for your help!

Several members of the chapter met for a work day to get things ready for the upcoming Labor Day weekend show.  During this time much needed work was done on equipment that has sat for to long and needed some attention and some finally started as much needed work has been done since the last show.  Some work was also done on grounds to minimize work before the show.  Some discuss was had on setup of displays during the show.  It was a good productive day and much work till do at home for the next work day July 17th 9am to ? and TBD July 18th, 2021.

Chapter 4 members met at the show grounds to talk about the nice weather and discuss plans for the year ahead.  At the meeting a few new members joined in to meet everyone and talk  about antique caterpillars.  During the meeting it was discussed about some past work on grounds and what was needed to get the show area cleaned up.  Members discussed their plans to attend shows coming up during the show season.  Also dates for workdays were set for June 19th, July 17th, and TBD July 18th.  These days will be used to get the grounds ready for show, machines serviced and in running order, and plan for show.  Some discussion was had on new machines either restored, with new homes, or being brought in for the show.  These pieces will be an increase from last show and will  be the best show since 2015 with numbers of machines in the dirt and working.  This years show will feature steam with another clubs Erie Steam Shovel working on site, a restored Bucyrus 41B Steam Dragline on site for its first show, many other draglines also on site working during the show.  Discussion was had on how we would like to setup the site during the show.  A few new pieces will be on site for the show that will  need some ground work done for future displays. The members enjoyed a quick meal and chatted about what has been going on in their shops.